How The Texan Stole Christmas #NewRelease by @JacquieRogers Giveaway!

How did folks celebrate Christmas in the Old West? How about the single gals? What did they do? 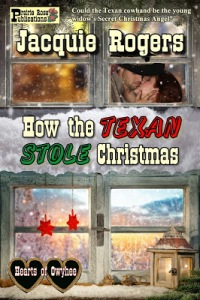 The best way to find out (and fun, too!) is to read newspapers that cover the time and place of my stories. When I was researching for my Hearts of Owyhee series, I ran across this item from the December 21, 1872 issue of The Owyhee Avalanche (the oldest newspaper in Idaho, still operating out of my hometown, Homedale, Idaho):

THE CHRISTMAS TREE. The Christmas Tree Festival will be held in Jones & Bonney’s Hall. We will stake in addition to what was said in our last issue, that the Brass Band, composed at present of Messrs. Charles Leonard, Joe Gross, Benj. Davis, Rufus King, Ferd. W. Frost and E. Douglas, will perform some of their best pieces, which will add greatly to the pleasure of the occasion.

The singing, accompanied by the organ, will be done principally by young girls who have learned all the music they know in Silver City, and who by virtue of talent, industry and a good teaching have acquired, in our judgment, wonderful proficiency in the beautiful art over which the Muses preside. They are our little folks, and not imported singers, which will make it all the more interesting; that they will do their part in first-class style for their ages, we have not the least doubt, in fact, we know they will.

The tree will be a prolific one no doubt. The Argosy of Santa Claus, St. Nicholas, & Co. arrived at the port of San Francisco four days ago, as we are informed per telegram, and a large cargo of its merchandise is on its way up here, and will not fail to arrive in time. ~~

I could just see the hustle and bustle of Silver City.

Brass bands were wildly popular all over the West then. Yes, they decorated and put up Christmas trees. They had dances and concerts. And Santa was on his way!

So why not have a Secret Christmas Angel event for all the single men and women in town? Seems like something they’d do. And that’s what How the Texan Stole Christmas (a Hearts of Owyhee single read) is all about. Here’s the blurb:

Winnifred Spangler has thrown herself into community work to ward off the pangs of her lonely heart. Fairview, Idaho Territory, is snowed in—and cabin fever has set in with a vengeance. Winnie organizes a gift exchange for the town’s single young adults. Her hope is that a few of them will find the loves of their lives.

Judd Shaw, a Texas cowhand, hates the ice and cold. As soon as the roads are passable, he’s headed back to Texas. But thanks to his childhood friend, he’s caught up in the Secret Christmas Angel game, and the name he draws is the prettiest widow in all of Idaho—Winnie.

How the Texan Stole Christmas

Leave a comment for a chance to win Much Ado About Madams by Jacquie Rogers!

Visit Jacquie at the Pioneer Hearts Book Store for a list of her books!

11 thoughts on “How the Texan Stole Christmas”