A Story Is Born – By Ruby Merritt 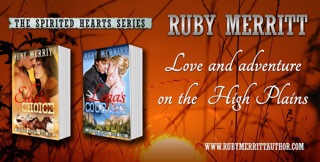 A common question for authors is where do you get the ideas for your stories? I’m sure the answers vary as much as the authors do. I for one get my stories from a question that pops into my head. Yep, one little question. Then I’m off and running, I mean, writing.

In the first book of my Spirited Hearts series, Ella’s Choice, the question was, “What if a white woman, who has lived with the Lakota Indians for ten years, suddenly finds herself back in white man’s world?” Now, the question of Indian captives returning to the white man’s world has fascinated me for years. One of my favorite true accounts of such a scenario is the story of Cynthia Ann Parker, who was kidnapped by the Comanche as a young girl and lived among them for almost twenty-five years. I have always craved more details about how she felt coming back to a world whose ways were almost foreign to her. Unfortunately, very few details from her perspective exist, mostly because she was devastated to be separated from her Comanche husband and children and quite uncommunicative. So, finally, I decided to write my own version of the Cynthia Ann Parker story, but of course with a happily ever after. Thus Ella Hastings, known as Little Brave among the Lakota, was born along with Beech Richoux, a half Lakota, half French Army Scout who himself grapples with balancing between his two worlds.

With my second Spirited Hearts book, Lena’s Courage, my question was, “What if a woman was suddenly faced with the man who violently stole her innocence years earlier?” Certainly this is not an easy topic to tackle, but I wanted to show how a woman could find the courage and tenacity to face such a situation, particularly in 1870s Cheyenne, Wyoming. And that answer came to me in one word: family. Lena would do anything to protect the son she loves with all her heart, although he was the result of the heinous act. Of course, she’s not alone in this endeavor. Lucas Kline is an ambitious young lawyer whose painful past and thirst for justice have him fighting vigilantism as a solution over legal and lawful means. Through the quest to make their community safe for all once more, Lena and Lucas find their happily ever after together.

The question for my third Spirited Hearts book, Grace’s Purpose, is a topic for another post, but I will say the story is slated to release next year. I have plans for two more books in the series, but really, who knows how many. As long as questions keep popping into my head, I’ll keep writing.

Visit Ruby at the Pioneer Hearts Books Store on Amazon by clicking here.

Ruby Merritt writes historical western romance. Her passion for imagining life and love on the High Plains has its roots in reading and rereading Laura Ingalls Wilder’s Little House books as a child.

Although Ruby doesn’t call the High Plains her home, she resides in an equally beautiful and rustic locale, The Gateway to the Texas Hill Country.

When Ruby’s not reading or writing, she can be found riding her horse or homeschooling her children, who are avid horsewomen and readers as well.

Visit Ruby online at one of the following sites: