Hi everyone! I wanted to talk a little bit about my brand new single-author western romance anthology, WINTER MAGIC. 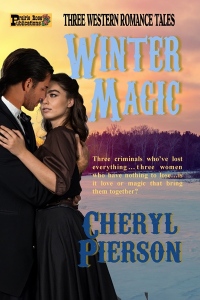 This is a collection of three stories that appeared in some of Prairie Rose Publications’ anthologies over the last year. Sometimes, it’s hard to tie stories together with a logline, but I love this one we came up with: Three criminals who’ve lost everything…three women who have nothing to lose…is it love or magic that bring them together in these three romantic tales of the old west?

The first story, HEARTS AND DIAMONDS, was a part of the Cowboy Cravings anthology (June 2014). Hired gun Nick Diamond is determined to ruin the life of his nemesis, Carlton Ridgeway, by claiming Ridgeway’s bride at the altar with a damning lie. He never gives a thought as to how his actions might affect the bride, Liberty Blankenship, who is ready to sacrifice herself for respectability—though she longs for love with all her heart. When Ridgeway comes looking for a fight, Nick obliges—and all hell breaks loose—but will Liberty get her heart’s desire in the end?

Since I had brought the subject of brothers up in Nick and Libby’s conversation, and since Jake, the youngest brother, made a short appearance in HEARTS AND DIAMONDS, I decided to introduce the middle brother, Brett, in SPELLBOUND, my contribution to the Cowboys, Creatures and Calico II (Oct. 2014) anthology. We had so many wonderful submissions for our Halloween anthologies in 2014 we had to make a second volume! My story appeared in this anthology because of the element of magic—and the fact that the heroine, Angie Colton, is a witch—but it actually takes place closer to Christmas. In fact, the Christmas tree is the entire reason the showdown happens like it does between safecracker Brett Diamond and the villain, Teller Magdon. Without a bit of magic, things might not have turned out as they do!

Finally, in LUCK OF THE DRAW, the youngest brother, gambler Jake Diamond gets his own story. This tale appeared in WILD TEXAS CHRISTMAS (Nov. 2014) and I love the fact that “family” is the theme—with it being so close to Christmas. Jake has a bit of a history with the heroine, Lainie Barrett. She’s been held hostage with him for several days in Brett’s story, SPELLBOUND. They’ve said some things to one another under duress that maybe shouldn’t have been said. But when Jake accompanies Lainie back to visit her mother to let her know she’s all right, they make an incredible “find” that shows them Lainie’s odd “gift” and solidifies their relationship. Can a gambling man and a novice witch risk everything on each other?

Here’s an excerpt from the first story in the collection, HEARTS AND DIAMONDS. Nick has just forced Libby to marry him. They’re in the honeymoon suite having their first “heart to heart” talk…

“Be honest, Libby,” Nick said softly. “You weren’t any more in love with Carlton Ridgeway than you are with me. So what difference does it make you which one of us you marry?”

Libby was surprised at how quickly her little ladylike hand uncoiled from her proper stance and unerringly slapped his handsome face, only inches from hers. The noise it made was like a gunshot, and he flinched as he stepped back, his own hand going automatically to his cheek.

“You’re right, Mr. Diamond. I’m not in love with Carlton Ridgeway. The most I had to look forward to was a scrap of respectability—if not for myself, then for my parents. Now, that, too, is gone. So, the only choice is to go forward from this point and—and make the best of things between us. But I will not be used, any more than I have been already, Mr. Diamond.”

“Nick,” he corrected unthinkingly. “And we—can get an annulment, if that’s what you want.”

Libby’s smile held all the promise and danger that was stored in the reckless wildness of her spirit.

“I wouldn’t dream of disappointing you so, Nick,” she said sweetly. “No, we’ll make our dreams come true together,” she continued. “A home of our own, filled with children and, of course, true love.”

His lips quirked at her words. “That sounds pretty damn good to me, Libby. Uh…you do know what makes babies, don’t you?”

Though she only had a vague idea of how it was done, she wouldn’t give him the upper hand. She nodded sagely. “Oh, yes. And I’m looking forward to it.”

As if he knew her secret, Nick Diamond had the audacity to laugh aloud at that. Her face burned.

“I believe you’ll enjoy it more with me than you would have with Ridgeway.”

She moistened her lips and tried to settle the frantic pounding her heart had begun. “Well, then. Perhaps we should—start—immediately. With our family. Our baby.”

Nick stood silent as she floundered. Finally, he said, “Let’s have some dinner first, shall we? I’ll have the bellboy lay a fire for us so we’ll be comfortable when we come back from eating. You’ll need your strength for tonight…when the ‘baby making’ begins. I have a hell of an appetite—for good food and…good sex,” he added wickedly.

The Diamond brothers are cast out into the world by a crooked business deal at a young age. They’ve lost everything—including their father. Although they are forced to make their own way, brotherly bonds remain unbreakable: It’s all for one and one for all.

HEARTS AND DIAMONDS—Revenge sets hired gun Nick Diamond after a bride, and nothing will stand in his way. But when that bride happens to be outspoken firebrand Liberty Blankenship, all bets are off. Anything can happen when HEARTS AND DIAMONDS collide!

SPELLBOUND—Safecracker Brett Diamond and witch Angie Colton take on a border gang leader who is pure evil. Can Angie’s supernatural powers save them? No matter what, Brett and Angie are hopelessly SPELLBOUND.

LUCK OF THE DRAW—Handsome gambler Jake Diamond and beautiful fledgling sorceress Lainie Barrett make a last-ditch effort to reunite Lainie and her mother for Christmas. Along the way, Jake and Lainie realize there’s no escape from the powerful attraction they feel toward one another. But do they know each other well enough to become a family when they rescue an abandoned infant? With their own particular talents, they discover life is one big poker table—and love can be had if they are willing to risk it all!

Thanks so much to everyone who has stopped by today! I want to give away a digital copy of WINTER MAGIC to one lucky commenter, so please leave your contact info in your comment in case you win!

Cheryl Pierson was born in Duncan, Oklahoma, and grew up in Seminole, Oklahoma. She graduated from the University of Oklahoma, and holds a B.A. in English. She has taught numerous writing classes and workshops over the past years and also works on an individual basis with many of her students, and other authors, locally and nationwide.

Cheryl lives with her husband in Oklahoma City, Oklahoma, where she has been for the past 30 years. She has two grown children, ages 25 and 28. You can e-mail her at fabkat_edit@yahoo.com

You can visit the website for her publishing enterprise, PRAIRIE ROSE PUBLICATIONS, at http://prairierosepublications.com/

PRP is a publishing company devoted to publishing westerns and western romances written by women.

PRAIRIE ROSE PUBLICATIONS was opened in August, 2013, by LIVIA J. WASHBURN and CHERYL PIERSON, two authors who saw a need for such an imprint. Usually, when people think “westerns” they think of male authors and male readers—but that’s not true in today’s world. Many women are just as interested in reading—and writing—westerns as their male counterparts; and of course, western romance has always been popular among the ladies!